On tender brainwashing (review of “A Man from Podolsk”)

Oskaras Koršunovas has once said that his theater is smaller than the Vilnius mayor’s secretary’s office. It’s been a while since I last visited the mayor, so it is probably true, but this compactness only adds authenticity to Koršunovas’ latest premiere A Man from Podolsk. When you’re afraid to stretch your legs so that dancing Serioga doesn’t trip, when a Russian policeman who keeps walking back and forth suddenly bends down and starts peering straight into your eyes and asking questions, you get knocked off balance and feel like agreeing with everything.

An hour and a half passes very quickly. The play makes you laugh, scares you, takes you aback. You try to guess how the plot may unfold and shake your head when your guesses prove to be wrong.

The idea of A Man from Podolsk is very simple – Nikolai (actor Šarūnas Zenkevičius), a resident of a dull city in the Moscow area, is detained by the police. Trying to fathom why he was arrested, he utters a normal Russian argument, “I wasn’t even drunk”. However, a regular police questioning turns into a mixture of phantasmagoria, absurd theater, a quiz and a disco with the first policeman (actor Marius Repšys), who is calling all the shots, a bureaucratic and simple second policeman (Rytis Saladžius), a thug from Mytishchi (Marius Čižauskas), Serioga and Captain Mariya (played very well by Giedre Mockeliūnaitė), who often overshadows them.

Nikolai-the-detainee’s transformations and Serioga’s comments at first seem funny, then sad, and, finally, scary. Although the officers threaten to beat Nikolai up and plant drugs on him, they do something much worse. It is not easy to witness someone’s subtle and intellectual humiliation as a result of which the person surrenders, turns inside out and signs a document which says that he is an animal, an uninterested piece of shit whose job is boring and music – useless.

Serioga-the-thug, as if imprisoned in a symbolic cage, enjoys watching the process of destruction of Nikolai’s dignity only because his own dignity has already been destroyed, his brain has already been washed and he knows that “it’s just the beginning, there is going to be another level.” Serioga resembles a drug addict who, fully aware of his own inability to give up his habit, watches with macabre interest as another person is being dragged down the same detrimental path.

It becomes even more distressing when you realize that a true allegory of brainwashing in present-day Russia is unfolding before your very eyes, however, there the role of the policemen is played by the federal TV channels. No need to beat you up if we can wash your brain and prove that Podolsk is no worse than Amsterdam, only different. And why travel to rotten Europe when you can see similar images from the window of an electric train riding from Podolsk to Moscow.

In the threatening question asked by one of the police officers, “Is the country to blame that you are such a loser?” we also hear notes of totalitarianism.

But is it only Russia that the play reminds us of? After all, in our own country we are very keen on constructing an absolutely positivist reality in which the ladies are the prettiest, the beer – the finest and possibilities – unlimited. We’ve gone too long without a war, haven’t we?

And it’s not only positivism that we’re yearning for. The alternative to a police state would be a criminal state. “For the sake of the homeland” yelps Serioga unexpectedly even for himself. Unexpected, huh?

The characters of the play transform in an interesting fashion – while boorish Seroga, threatening and violent in the beginning, gradually starts to seem like a good guy with a big heart, Captain Mariya is much more terrifying.

Her strict uniform only highlights her ostentatious sexuality. At first sight she seems to be playing the role of the good cop opposite the first policeman, played by M. Repšys, who sometimes acts like a complete psycho.

But when she showers poor Nikolai with compliments pretending to admire him and makes him say that he does not love his girlfriend and thinks she’s ugly, then you understand who’s running the whole interrogation parade and why millions of people take for granted what the cold-eyed ladies are telling them from their TV screen.

But the show really belongs to Marius Repšys. “Keep smiling, keep smiling,” he urges Nikolai to dance and you wait for an hour and a half for him to take off that smile and let the barely controlled tiger – the psychopath – break loose. Marius balances on a very tight rope and walks it very well.

The performance is a heavy one, but its heaviness is as deceptive as the news on Kremlin TV. Most of the time it makes you laugh, but then you choke on your laughter and start to feel like poor Serioga in his imaginary cage.

However, if you are unhappy with your life and think that the state owes you something, you should come and spend an hour and a half as a man from Podolsk. On your way out you will definitely feel like exclaiming, “Bloody hell!”

A few impressions of “Cleansed”, the latest production of O. Koršunovas
Read 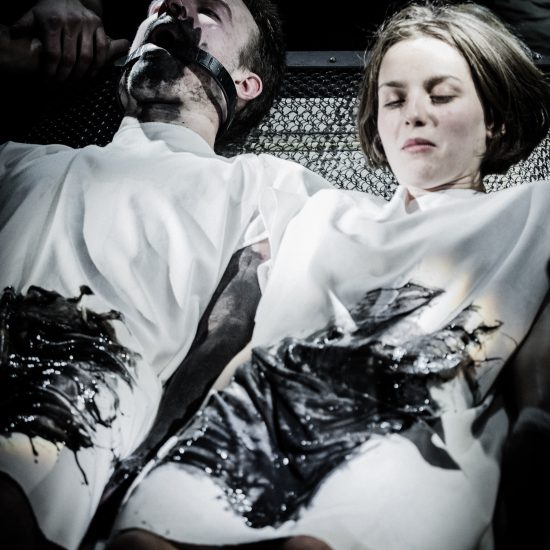